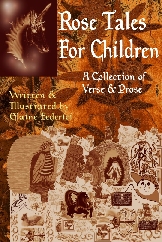 Inspired by the classics of children's literature, this 200 page book is a collection of original stories written in both verse & prose for children of ALL ages.
Accompanied by black & white illustrations, 'Rose Tales For Children' was written to amuse, teach, & inspire a love of literature in children. Pre-school to upper-grade school.
'Sweet Shorts' to lengthy tales, silly poems to rhythmic ballads, the writings introduce amusing characters and word play in witty, fun, and often thought provoking style. 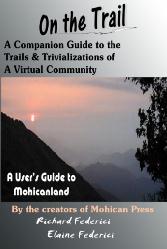 On The Trail: A Companion Guide to the Trails & Trivializations of A Virtual Community

So you think you want to build a virtual community? And you think it would be a relatively simple, hassle free endeavor?

Written as a semi-sequel to 'On the Trail of the Last of the Mohicans' - this companion guide offers a look at the surprising, humorous, & sometimes scandalous developments spawned by a book, a web site, & the virtual community called "Mohicanland." Included are several interviews we've had with cast members, behind the scenes scuffles, the low-down on all the things you've EVER wanted to know about Mohicanland but were afraid to ask, the origins & development of this web site & the community it spawned, a how-to-guide for dealing with *stars* & their overly enthusiastic admirers, scandals, satire, & more.

Written by Kristina O'Donnelly, also known as The Towne Crier - a fast-paced political thriller. The plot flows between New York, California and Istanbul, on a cinemascopic reel of international romance, terrorism, sex, intrigue among film and TV stars, and subtle undercurrents of mysticism. Superbly written novel!

Another novel written by Kristina O'Donnelly! Contemporary romance; A powerful novel for every woman caught between her career and principles. Passions erupt as quickly as do tempers in this labor vs management, career vs love story.

Authored by our own Canadian Trader, otherwise known as Bea Schmitt, and Dennis Randolph Moore! A poignant collection of memories from people who experienced World War II & its devastation.  Includes accounts from soldiers & civilians. women & men ... written with the hope that the sacrifices & horrors experienced by so many will never be forgotten.

SEE: The Realm of the Rose!

Waltz With the Wind

The Book of Fairies

OTHER AREAS OF OUR BOOK SHOPPES:

Couldn't find what you were looking for? Try our Search Engine!